When the point of contact between the product and the people becomes a point of friction, then the designer has failed.

On the other hand if people are made safer, more comfortable, more eager to purchase, more efficient - or just plain happier - by contact with the product then the designer has succeeded.”

This is probably the most succinct definition of UX design that you’ll ever find. But these words didn’t come from the blog of an international UX agency, they weren't even spoken from the stage at TED. 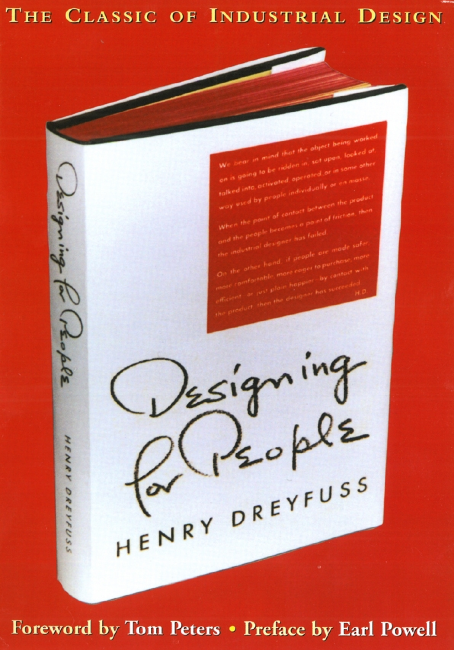 They were written 60 years ago by Henry Dreyfuss, in his classic ‘Designing for People’. In the book he recounts his then 20 years’ experience of working as an Industrial Designer, and (apart from reading like something Don Draper would have written) the book reveals a lot about the origins of the modern UX agency.

Dreyfuss, along with Raymond Lowe, Dieter Rams, and later Don Norman, was one of the leading designers of the early to mid 20th century. Between them, these men designed and refined many of the household products we use today; and in the process, they defined and refined the methodologies we still use.

This is what I learned about UX design, from a 60 year old book about industrial design,

Dreyfuss provides four principles of UX design (or Human Engineering, as it was called at the time),

If these sound familiar that’s because they are no different to the principles that most modern UX and Service Design agencies operate by today.

As for the design process, Dreyfuss outlines the series of seven steps his team would take when working with clients.

Again, nothing in this sounds drastically different to our processes.

I have often thought that one of the industrial designer’s most valuable contributions to his client’s product is his ability to visualise. He can sit at the table and listen to the executives, engineers, production and advertising men throw off suggestions and quickly incorporate them into a sketch that crystallises their ideas - or show their impracticability...equally important is the industrial designer’s outside point of view. Perhaps a better term is perspective.

The Problem with ‘UX’

For many years the UX industry has been wringing its hands over what to call itself. Are we UX designers, human-centered designers, service designers, experience design, product designers, or something else?  Over half a century ago our colleagues had similar concerns,

Even today, the term [Industrial design] leaves much to be desired. The word ‘design’ is certainly not the exclusive property of the industrial designer...The qualifying word ‘industrial’ doesn’t pin it down precisely, either. But it’s too late to try to coin a substitute. The term is one of the little agonies the profession must bear.

The terminology may have moved on, but the argument hasn’t. UX may be as inaccurate a term now as Industrial Design was in Dreyfuss’ era, but as long as clients understand what it mean - as long as it adequately communicates a methodology - then it surely has some currency.

If you’ve ever taken someone through a series of user tests you’ll know that what they say and what they do are often not the same. Things, evidently, never change,

Often people give answers they think the questioners want to hear or that that believe make them appear connoisseurs of scholarly thinkers.

When products or services are commoditised, good design is essential to success,

Long ago, the wise men of the petroleum industry realised that one gasoline looks the same as another… To compete intelligently, therefore, it was advisable to give the product a personality through good services and facilities.

In recent years we’ve seen many big-name UX agencies bought-out by clients, and we've seen large corporations set up internal UX departments. These are seen as an existential threat to independent agencies, and the industry as a whole. The Industrial Design industry faced a similar threat,

Economically, it may seem advisable for a large corporation with a constant volume of design work to set up its own design department. Whatever the economics are sound over a long period of time remains a question, there is the danger that the internal designer, no matter how good he is, may become frustrated by office politics and dulled by the sameness of this work, so that in time he loses his eagerness and his originality and takes the easy way.

Dreyfuss’ assessment of battle between internal design departments and external agencies is not very different to the modern debates on the same subject. Although where the debate has moved on is in the area of accessibility - the barrier to entry for UX and service design is certainly lower than that of Industrial Design. It remains to be see if office politics and the type of work affects the long-term viability of such internal design teams.

Some clients see human-centered design as a process that can be applied to an existing ailing product or service, rather than a methodology to be applied throughout the development process.

Some persons think the industrial designer is the equivalent of a wonder drug like penicillin, to be used when sickness strikes. Actually, we are a preventative medicine.

We’re designing for people who are becoming ever more technologically literate (whether this is a good thing or not), but we've always been doing that,

[The telephone] has permeated our daily activity and become a personal thing, like reading a letter, and a habit, like brushing the teeth. A child uses it before he learns to read Indeed, some persons argue that the pressing technology of the times is in itself responsible for the standardising life, reducing it to the level of uninspired gadgetry, and thus creating an emptiness in the lives of many Americans.

Sixty Years in the Difference

It’s tempting to think that we’re designing for the new, for next big technology, service, or innovation. But our challenges as designers aren’t that much different to those in the past. The technologies may change, and the terminology may evolve, but the processes - the ways we tackle challenges and solve problems - has not.

As Dreyfuss wrote, “to look ahead one must learn to look back.”